Below you can find a list of the previous rectors of list of St Mary Magdalen Bermondsey. 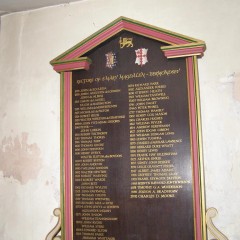 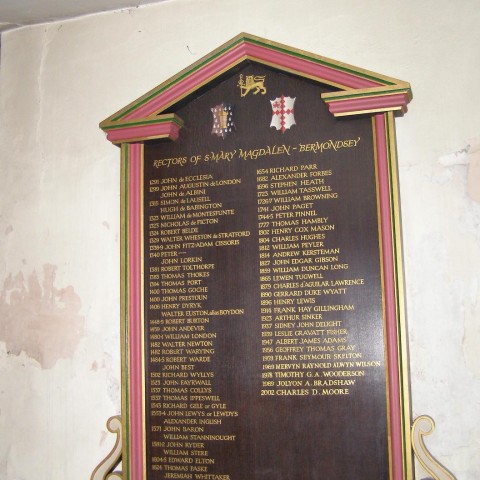 According to  http://www.archive.org/stream/cu31924028066847/cu31924028066847_djvu.txt, “William Browning, a fellmonger, purchases a limited advowson of the Rectory, and presents William Taswell, D.D., who occupies, perhaps as (what is vulgarly called) a warming-pan, from 1723 to 1726-7, and then resigns. The son of the patron-purchaser, the Reverend W. Browning, M.A., is now presented, and continues to be the minister until his death, 1740. Mr. Browning appears to think that he has not as yet had money’s worth, and so he presents John Paget, M.A.; a lawsuit ensues, and as Mr. Browning has exceeded his time, his nominee, or clerk, as he is called, is in due course ejected.  For more on William Browning see the memorials page.

WikiSource http://en.wikisource.org/wiki/Whitaker,_Jeremiah_(DNB00) says that Jeremiah Whitaker succeeded Thomas Paske in 1644; he served until his death on  1 June 1654, and was buried in the chancel.  The same source  http://en.wikisource.org/wiki/Whitaker,_William_(1629-1672)_(DNB00) says that William Whitaker (son of Jeremiah Whitaker) succeeded his father as rector in 1654, which is at odds with Richard Parr (above).  Possibly this confusion came about because 1654 was the year that Richard Parr became vicar of nearby Camberwell.

The same link as above http://www.archive.org/stream/cu31924028066847/cu31924028066847_djvu.txt says that “The circumstances of the succeeding incumbency are not clear. We are told, on the one hand, that William Whitaker, the son of Jeremiah, was appointed to succeed his father in 1654 ; on the other, that the Rev. Dr. Parr, chaplain to Archbishop Usher, received the vacant benefice.  Mr. Phillips [see below], in his list of the Rectors of Bermondsey, does not include William Whitaker, but represents Dr. Parr as filling the office from 1654 till his resignation in 1682. He does, however, say elsewhere that William Whitaker was ejected at the Restoration.

Dr. Rendle’s account of this divine is as follows: “William, called in 1654 to succeed his father as Rector of Bermondsey, was a minister indeed ; skilled in languages – Greek, Latin, and Oriental; fit to be a tutor at his college, i.e., Emmanuel, at Cambridge; a peacemaker, whose pride it was to settle disputes, and leave no rancour behind; just the man, making a conscience of his work, to be ejected. So in 1662 he was no longer Rector of Bermondsey.”

However, http://www.british-history.ac.uk/report.aspx?compid=43026 gives some interesting and conflicting details of Thomas Paske and his successors: “In 1624 the patronage was exercised by Samuel Paske, citizen and merchant tailor of London, probably for one turn. He appointed Thomas Paske, D.D., master of Clare College, Cambridge.  In 1642 the churchwardens and parishioners petitioned the House of Lords because this Thomas, their rector, had not preached even once a year and had otherwise done nothing to provide preaching or reading in the church or to supply a dwelling for a curate. The expense of such arrangements had fallen on the petitioners. They had lately bought the next presentation to the living and they prayed for a confirmation of their elect.  In the following year a draft order of the House directed the sequestration of Dr. Paske, a non-resident minister and a teacher of heretical doctrines, in order that the parishioners might maintain their own minister. Paske, whose Arminian opinions were as obnoxious as his negligence, was ejected accordingly in this year, and the parishioners appointed in his stead Jeremiah Whitaker, an eminent Orientalist, member of the Westminster Assembly, who held the benefice until his death in 1654 and was buried in the chancel of the church. He was succeeded by another distinguished theologian, Dr. Richard Parr, who resigned the living in 1682.”

This is a link to an on-line copy of “The history and antiquities of the parish of Bermondsey” By G. W. Phillips, 1841, referred to above.

It would seem that William Whitaker succeeded his father as rector in 1654 and remained in post until 1662, being then succeeded by Richard Parr.  If you can confirm the exact situation here, or add details of any other rector of this parish, please contact the webmaster.