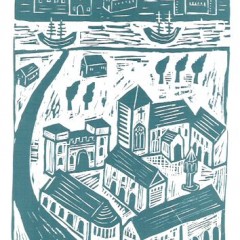 St Olave’s was an ancient parish (from which the name “Tooley Street” was derived).  The last church of this name was erected in 1743 and was situated on the eastern side of the southern end of London Bridge; it was closed in 1918 and demolished in 1920-28.  There is a memorial plaque on a Grade II listed office building “St Olaf House” opposite the entrance to London Bridge Station but no other trace survives at its site.  However, the wrought iron altar in the South Aisle of St Mary Magdalen was originally at St Olave’s, then subsequently it was moved to St John’s, losing its marble top in the attacks of 1940, before arriving at St Mary’s in 1965.  It shows signs of once having been severely corroded, probably caused between 1940 and 1965.

The closure of St Olave’s churchyard was the subject of Acts of Parliament (in 1918 and 1925 – see Hansard http://hansard.millbanksystems.com/) due to the desire to use the churchyard for commercial purposes rather than as open space (as required by law).  This desire was understandable, it being a most valuable and useful piece of waterfront beside London Bridge!  The eventual compromise contained a number of conditions, one of which was the memorial plaque mentioned above, and another was the creation of Tanner Street Park (at the junction of Tanner Street and Bermondsey Street), using some of the proceeds.  In the SE corner of this park is a large stone water fountain, now sadly unidentified, which actually is the top of the tower from St Olave’s church (Photograph coming).

St John, Horselydown was built in 1728 beside what is now Tower Bridge Road, and was severely damaged in the Blitz in 1940.  It seems that the congregation continued to meet in the hall in Fair Street until the 1960’s – weddings were recorded as late as 1965.  The site of the church is now occupied by the London City Mission building, just south of the junction with Tooley Street; the (Grade II listed) plinth of the church is still clearly visible (as seen in this photograph link), up to about ten feet high from the churchyard.

St Luke’s Bermondsey was built in 1884 in Grange Road, close to what is now Boutcher School.  The church was demolished in 1965 and there are now few signs of it, (possibly) in the school grounds (which are not open to the public).